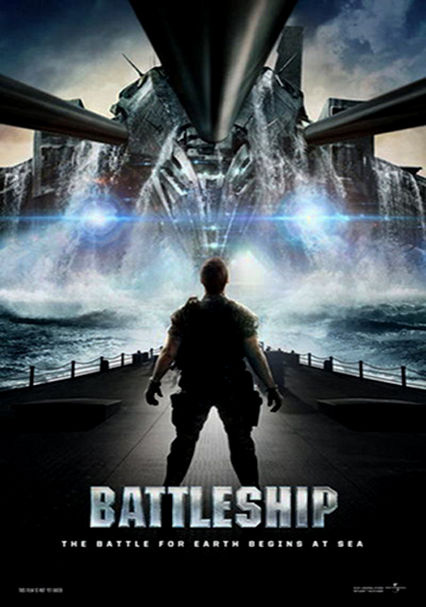 2012 PG-13 2h 11m Blu-ray / DVD
The classic Battleship board game moves to the big screen in this at-sea adventure about defending planet Earth from a mysterious enemy fleet. At the center of the action is a pair of naval officer brothers and their commanding superior.

Parents need to know that Battleship (inspired by the classic Hasbro board game) is the kind of summer alien adventure that, like Independence Day, features a doomsday alien invasion that only a select armed forces group can fight against. As you'd expect, there's a high body count -- mostly due to all of the building- and ship-destroying explosions that the aliens -- though not much gore. Many high-tech weapons are used, one female character dresses somewhat suggestively, and the language can be occasionally salty -- "s--t," "bitch," and two cut-off exclamations of "motherf--er." Although the effects-heavy action is filled with scenes of targeted violence, there are ultimately some positive messages about rising to the occasion and overcoming your fears.

A few passionate kisses, a shot of a couple in bed, and the male star is shown wearing just a towel after coming out of the shower. One female character wears particularly tight or revealing clothes, even when she's working as a physical therapist. In one scene, she kisses her boyfriend while wearing only a string bikini top and very short shorts.

As with most alien-invasion films, there's a huge body count. The aliens wipe out two entire ships, destroy a number of buildings, and cause widespread deaths in Hawaii and China, as well as worldwide panic. A few well-liked secondary characters die. Lots of explosions and gun violence, as well as some minor brawling among the rival naval officers. Characters are shown bloodied from close calls, as well as moments before their ships explode.

Characters rise to the occasion to sacrifice themselves for the greater good, summon their bravery to take a stand against the aliens, and learn to think first and act later, even if they're usually impetuous people. Although violence is the story's ultimate problem-solver, Battleship is still a story of courage under fire and cooperating to target a common enemy.

The movie is based on the Hasbro board game, and Hasbro is credited as one of the production companies. There's one segment in which grid coordinates are called out just like in the game. Otherwise, there aren't any major product placements within the movie itself -- but there lots of tie-in products available, from special editions of the board game to first-person shooter video games, apps, toys, and more.

Some drinking early in the film: Adult brothers do shots for a birthday at a bar where others are also consuming alcohol. The main character gets drunk and makes some iffy decisions as a result.