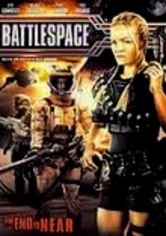 2006 NR 1h 23m DVD
During battle, Col. Mara Shryyke (Eve Connelly) is stranded on a barren world, where she discovers a doomsday weapon aimed at her home planet. Armed only with her wits, she races time to destroy the machine before it carries out its mission. As her genetically modified enemies close in, only 42 hours remain before everything she knows is destroyed. This sci-fi thriller co-stars Blake Edgerton, Paul Darrow, Spencer Slasberg and Iva Franks Singer.