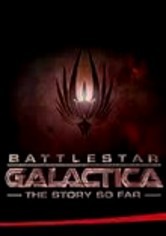 2006 NR 0h 44m DVD
For viewers who want to get up to speed fast on the popular space opera "Battlestar Galactica," The Story So Far incorporates footage from the miniseries and first two seasons to recap the saga of humanity's quest for a new home. Narrated by the resistance leader (Mary McDonnell) of Cylon-occupied New Caprica, the special provides an engrossing overview of the award-winning series that's redefined the sci-fi genre with its issues-driven stories.