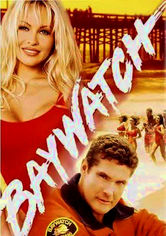 On a picturesque beach, high atop a lookout tower, Lt. Mitch Buchannon (David Hasselhoff) and his team of attractive young lifeguards patrol the shores with a watchful eye, keeping tourists and beachgoers safe. This five-disc set features all 20 episodes from the premiere season of the syndicated show, a series that went from cult hit to worldwide phenomenon. The cast also includes Parker Stevenson and Erika Eleniak.

The lifeguards run up against pirates, a diamond smuggler, territorial surfers and a host of other problems on and off the beach in the third season of the popular series. As always, seasoned guard Mitch Buchannon (David Hasselhoff) presides, counseling the younger staffers in matters of life and love. Guest stars this season include Elizabeth Berkley, John O'Hurley, Lou Rawls, Randolph Mantooth and Joseph Campanella.

Parents need to know that this 1990s lifeguard series owes much of its popularity to good-looking cast members wearing short swim trunks and cleavage-revealing bathing suits. While the show's sexual innuendo is fairly tame compared to today's standards, it's still a bit iffy for young kids. Some of the drowning scenes might be a bit scary to watch, too, and serious subjects like safety, alcohol addiction, and specific medical disorders are touched on. On the plus side, the show offers some positive messages about leadership, teamwork, and parenthood.

Strong sexual innuendo. Kissing, hugging, and making out; sometimes people are shown lying in bed together (no visible nudity). Plenty of shirtless men and skin-revealing bikinis. The show's signature moments include lifeguards running in slow motion during rescues, usually highlighting their bouncing chests.

Some of the plotlines are about criminal behavior, including murder. At least one episode shows a dead body washing ashore. Occasional arguments; some shoving, pushing, and punching. Occasionally, guns are used and/or gunfire is heard. Some of the rescue missions are intense and show people drowning.

Presents a very romanticized vision of lifeguarding, but does touch on some serious health and safety topics. Positive messages about leadership, teamwork, and parenthood.

Popular Southern California areas are visible, including the Santa Monica Pier. Some motorcycle and car makes like Yamaha and Mercedes-Benz are visible (but not prominently featured). Some of the tunes featured on the show are sung by Hasselhoff.

Visible consumption of beer, wine, and champagne. Irresponsible drunken behavior and drug/alcohol abuse is occasionally shown, but it has negative consequences.