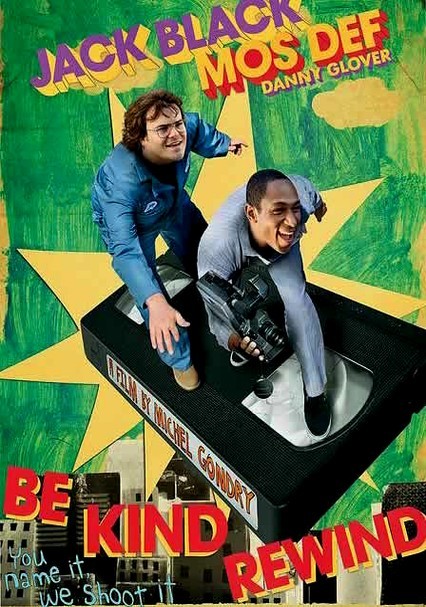 2008 PG-13 1h 41m Blu-ray / DVD
A video-store employee can't believe his bad luck when his kooky buddy accidentally magnetizes himself and inadvertently erases every tape on the shelves, forcing the blundering duo to re-create low-rent remakes of all the films.

Parents need to know that the stars of this comedy -- Jack Black and Mos Def -- are both extremely popular with teens and even tweens. Happily, the movie is age-appropriate for both groups (particularly teens). There's some language (including "s--t"), but not as much as in most PG-13 films, and virtually no sexual activity, save for a few "on camera" kisses while the characters re-shoot movies. There's also one discussion about "getting action." The main product tie-ins are West Coast Video and the re-filmed movies themselves.

Shots of kissing during scenes from various re-filmed movies. In one conversation about "how much action" the main characters get, Mr. Fletcher makes a somewhat crude joke.

In one scene, Jerry is magnetized by a power plant, but it's not disturbing, just funny. Mr. Fletcher roughly holds onto a punky teen while admonishing him. Pretend violence in the re-shot films.

The entire community unites for a common goal: to make a film and celebrate how it ties them to the neighborhood's history -- real or imagined.

Recognizable brands/names include West Coast Video and the many, many movies the guys re-shoot: Ghostbusters, RoboCop, Rush Hour 2, etc. Throughout the film, the life of jazz legend Fats Waller is an ongoing theme.