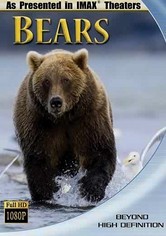 2004 NR 2h 10m Blu-ray / DVD
Chock-full of rare bear footage shot in authentic natural habitats throughout North America and the Arctic, this fascinating film that was originally produced for the giant IMAX screen has just as great an impact when viewed on an average-sized display. Highlights include a close encounter with polar bears hunting in the tundra, a sneak peek at grizzly bear cubs in Alaska and a scavenging session with black bears in Montana.