Beatles: From the Beginning to the End 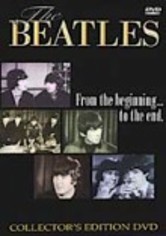 Beatles: From the Beginning to the End

2004 NR 1h 0m DVD
Follow the world's most influential rock 'n' roll band, the Beatles, with this documentary that traces their journey through behind-the-scenes glimpses at the lives of John, Paul, George and Ringo. From their early nightclub gigs and first U.S. tour to the breakup of the band and the deaths of John Lennon and George Harrison, the film provides a comprehensive portrait of the Fab Four, their music and their legacy.