Beatles: Fun with the Fab Four 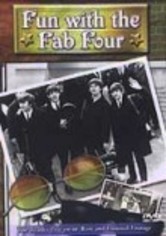 Beatles: Fun with the Fab Four

2003 NR 0h 54m DVD
Get a taste of what it was like to be a member of the world's biggest rock band, the Beatles. This music documentary takes viewers on the road with the group through interviews, press conferences, television appearances, newsreel footage and more. In addition to hearing the band members talk about their experiences, Beatles lovers can also relive several of the most controversial and fascinating moments in the group's history.