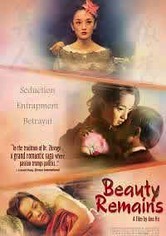 2005 NR 1h 27m DVD
Set in pre-Communist 1948 China, director Ann Hu's sumptuous family drama centers on half sisters Fei (Xun Zhou) and Ying (Vivian Wu), whose separate lives suddenly collide after the death of their father, a prominent entrepreneur. Their paths seemingly predetermined by the often-cruel whims of the men in their lives, the sisters must find a way to break the pattern and chart their own course.