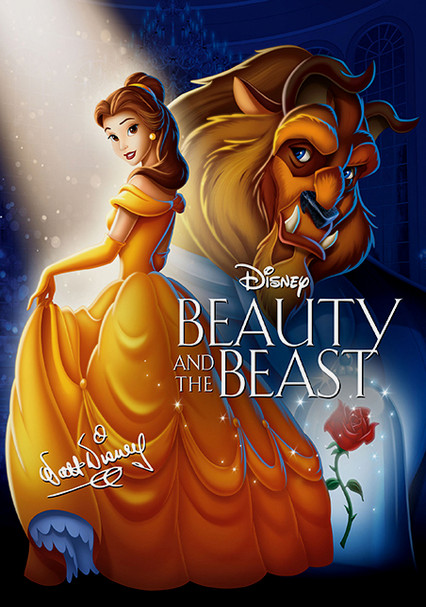 1991 G 1h 30m Blu-ray / DVD
In this modern-day Disney animated classic set in 18th-century France, young Belle yearns to escape her ordinary existence -- and her village's boorish suitors -- until she becomes imprisoned in the mansion of a hideous, coldhearted beast. Can Belle help the monster revive the man within?

Parents need to know that Beast's initial ferocity might scare younger viewers. And once kids have seen his gentle side, they may find scenes of him being hunted and stabbed by Gaston emotionally upsetting. The sequence in which a mob comes after Beast is also quite intense, and there's a fair bit of cleavage on display during the bar-set "Gaston" number. But kids mature enough for feature-length stories will find this one of the best Disney movies they could spend time with in terms of intelligence, quality, and originality -- not to mention having one of Disney's smartest, most independent heroines. Note: The movie's 2012 3D theatrical rerelease intensifies the musical numbers like "Be Our Guest" and the waltz scene in "Beauty and the Beast," but it doesn't make Beast's roars or the mob scenes too much scarier than they are in 2D.

Lumiere comically flirts with a maid, with fooling around implied. Budding romance between Beast and Belle, with some mild flirting and kissing. Bosomy barmaids swoon for Gaston during the song about him -- which also includes some innuendo and references to his physical appeal.

Beast has angry outbursts at first. Fierce wolves attack the main characters. Townspeople decide to kill Beast and storm the castle in a scary, intense mob sequence. In the climactic fight, a knife-wielding character falls to his death.

This timeless story has always revolved around the idea that it's important to see someone for who they are and not for what they look like. Also, brain wins out over brawn.

Belle is a Disney Princess whose brand reaches far and wide. Expect to see Princess branding on consumer merchandise, food products, etc., as well as in books, websites, and other media.

A raucous scene in a bar with plenty of mugs sloshing around.