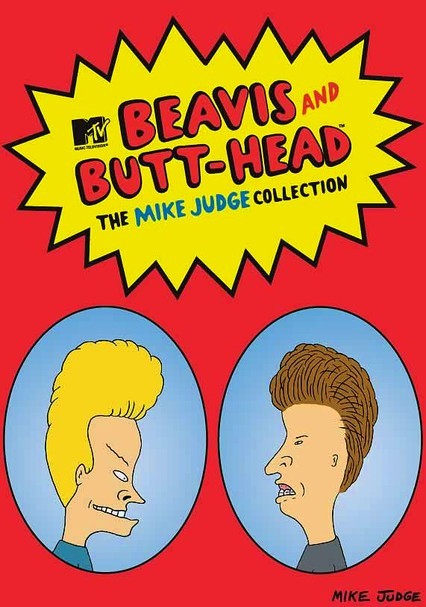 1993 TV-14 3 seasons
Deemed by many as a potent symbol of America's terminal decline, this lowbrow animated series was wildly popular with teenage viewers in the 1990s and is widely regarded as the pioneering force behind a new genre of subversive cartoon humor. Beavis and Butt-head's lives and perspectives are governed by a few basic imperatives: their love of TV and rock music, and an extreme distaste for school and the overall concept of learning in general.

World-class animated slackers Beavis and Butt-head spew out their special blend of crass wisecracks in this collection of 40 shorts. Created by Mike Judge ("King of the Hill"), the series became a cult hit responsible for permanent butt-imprints on couches across the nation. Extras include 11 music videos with commentary from the cartoon duo, director's cut episodes, a featurette and Beavis and Butt-Head appearances and interviews.

Mike Judge shares more of his favorite "Beavis & Butt-head" episodes and music videos in this three-disc set. Judge handpicked the 40 episodes and 13 music videos in this outrageous collection. Beavis and Butt-head add scathing commentary to videos from the Beastie Boys, Madonna, Radiohead and other top bands. Also included are previously unaired segments, featurettes and more to keep you gasping for air in between laughs.

The gruesome twosome is back in another wisecracking, butt-munching installment of The Mike Judge Collection. Features include the groundbreaking original, uncut short "Frog Baseball"; 42 episodes hand-picked by Mike Judge himself; "Taint of Greatness: The Journey of Beavis and Butt-head: Part 3"; and 15 rockin' music videos (including artists Soundgarden, Alice Cooper and Sonic Youth) with classic Beavis and Butt-head commentary.

Parents need to know that the sexual references, crass humor, strong language, and irresponsible messages in this animated series ensure it's not appropriate for tweens and offers nothing positive for the teen set. Beavis and Butt-Head are foul-mouthed ("damn," "bitch," "ass," etc.), irresponsible, uneducated slackers whose destructive behavior is the basis for the show's humor. They view women as a means to sex (though they never actually have sex), school as a waste of time, and rules as a challenge to their independence. The show's crudity is exaggerated and only upstaged by its graphic discourse about sex, including the guys' comments about arousal and ejaculation.

Pretty much anything short of the act itself is fair game. Innuendo-laced comments ("I think I just inoculated"), references to "stiffies," provocative photos of women, couples posed suggestively (bikini-clad women sitting on men's laps, for instance), as well as plenty of references to body parts like boobs, butts, and slang like "'nads."

The guys enjoy skeet shooting in their free time.

The show uses the guys' social ineptitude and idiocy as inspiration for its humor. Women are objectified through the characters' comments about their appearance and sex appeal. The guys' misbehavior and complete disregard for authority sends negative messages about real-life consequences of similar actions. Stereotypes run rampant, homosexuality is mocked, and bathroom humor is ribald as well: Beavis is a chronic nose-picker, and multiple uses for excrement is a common topic of discussion.

The teens often drink non-alcoholic beverages that look like beer and discuss the positive aspects of drunkenness, including the fact that alcohol increases the accessibility of women. Occasional background characters smoke.