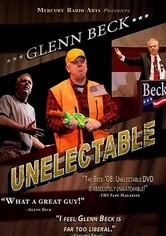 2008 NR 2h 0m DVD
Conservative political commentator Glenn Beck serves up his unique brand of stand-up and storytelling -- including his hilarious take on a stump speech -- in this July 2008 performance, filmed in front of a live audience at Dallas's Majestic Theatre. Beck, who hosts his own CNN Headline News show and a nationally- syndicated radio program, is the author of two New York Times best sellers and publisher of Fusion magazine.