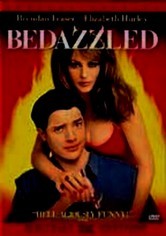 2000 PG-13 1h 33m DVD
Nerdy computer programmer Elliot Richards (Brendan Fraser) learns the devil is in the details when he makes a pact with Beelzebub (a sexy Elizabeth Hurley), who grants Elliot seven wishes in exchange for his soul. Trouble is, old scratch throws a curve ball into all of Elliot's "happily ever afters." A funny remake of the 1967 original starring Dudley Moore.

Parents need to know that playful sexual innuendo is a major component of this movie. There are lots of references to penis size, some comic depiction of homosexuality, and scenes in which characters flash their private parts off camera. Many of the women are seen in tight, revealing clothing throughout, including the female "devil" who displays her "attributes" in dozens of clinging, scanty outfits. A couple of action sequences are played for humor with gunplay, car crashes, and falls that result in no injury or death. Hell is depicted as a vast party scene complete with fire and brimstone. There's occasional swearing and potty language as well as some social drinking. One series of scenes finds the hero unwittingly involved in cocaine distribution in South America.

Lots of sexual innuendo and numerous women in scanty clothing throughout. Leading female character ("the devil") appears in one very sexy outfit after another: low cut tops, mini-skirts, clingy pants and jumpsuits. There are numerous references to penis size (it's a recurring theme) and some of the characters (but not the audience) get a good look at the hero's "winkie." Passionate kissing is shown in several scenes, but the only actual nudity is in the paintings that decorate some of the sets. Some sexy dancing.

Cartoon-style violence includes: a brief gun battle in which no one is shot or hurt; a devil-inspired multiple car crash in which no one is injured; a scary devil-figure; a quick shot of two drooling dogs gnashing their teeth; and finally, the leading character is shown falling long distances several times as he "transports" from one scene to another with no resulting consequence or injury.

This film is a retelling of the Faust legend and there are lots of clearly stated messages, some to purposely corny effect. "Be careful of what you wish for" plays prominently throughout. Additionally, the movie instructs that "wishing doesn't work like magic" and "it's not where we go, but how we get there." There's talk of the value of a soul and how it shouldn't be thought of lightly, the persuasive power of the devil, and the personal responsiblity everyone has in the choices they make, good and bad.

The "devil" smokes. Several scenes take place in bars or in party settings as the characters drink while socializing. In one lengthy sequence the hero has been turned into a drug kingpin and transported to South America; cocaine is the focus of this very stylized parody.