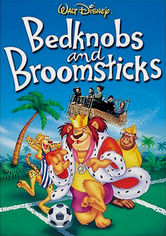 1971 G 2h 19m Blu-ray / DVD
During World War II, eccentric, self-styled witch Eglantine aims to use her newfound powers to ward off a Nazi incursion of England, taking the three children she's protecting with her on a magical bed to a fantastical, animated island.

Parents need to know that this classic Disney movie, re-released for its 25th anniversary, is more than two hours long and better suited for longer attention spans or partial viewings. The framework of the movie -- World War II, Nazi invasions, and bombings in London -- is about as un-child-friendly as it gets, but the film manages to take a lighthearted approach. Main characters never seem frightened by the war or soldiers, though the children talk briefly about losing their parents to the war. The climax of the film involves a drawn-out battle between the main character and a small group of invading Nazis in which the enemy soldiers wield swords and machine guns against her. Despite this apparent violence, no blood is shed, no one is hurt, and the main character retains a smile throughout the entire battle.

Some very mild flirtation between Miss Price and Professor Browne, including the suggestion that they will marry. In the animated portion, male and female fish dance cheek-to-cheek.

The children have been orphaned by the war and Miss Price, the witch, is searching for a magic spell to fight off the Nazis. Several scenes of cartoon violence during a wildly physical soccer match, as well as one real-life scene where the group is threatened with a knife. The final battle scene, where a ghost-like army of knights fights machine-gun wielding Nazis, might be very scary for some kids.

The older boy tells his siblings to "shut up."

The main character works hard to make a difference in the war effort. Along the way, she cooperates with others, and comes to understand the value of family and the wisdom of children. But these messages are clouded with subtle, but outdated ideas about women's abilities and an attitude toward war that might seem unfamiliar to modern kids.

A cartoon fish smokes a cigar. A main character talks to a child about wanting to go to the pub for a drink.