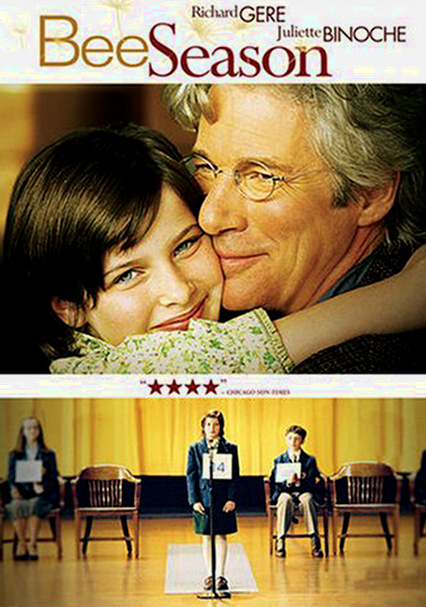 2005 PG-13 1h 44m DVD
Competing for the approval of her parents -- a professor of Jewish mysticism (Richard Gere) and a dedicated scientist (Juliette Binoche) -- 11-year-old Eliza Naumann (Flora Cross) is used to appearing ordinary. But winning the school spelling bee could be her chance to make an impression. It might also convince her father that she's destined for greatness. Kate Bosworth co-stars in this coming-of-age drama based on the novel by Myla Goldberg.

Parents need to know that this drama focuses on a family's gradual, difficult breakdown. It includes several tense family scenes, one harsh argument between father and son (yelling and using the f-word), and the revelation of the mother's mental illness (she's having flashbacks to the harrowing sight of her parents' fatal car crash, and stealing objects from houses she can reach by car and by foot). A young spelling prodigy comes to see not only how words are spelled, but also how to forgive and help her fragile family.

Flashbacks of car accident that left one character's parents dead (no bodies, but disturbing fragments of visual/emotional trauma).

Brief strong language by father and teenaged son during an argument (f-word).

Family grapples with loss of emotional closeness and spiritual direction; a troubled mother becomes a thief; a father becomes obsessed with his young daughter's capacity to "connect with God."