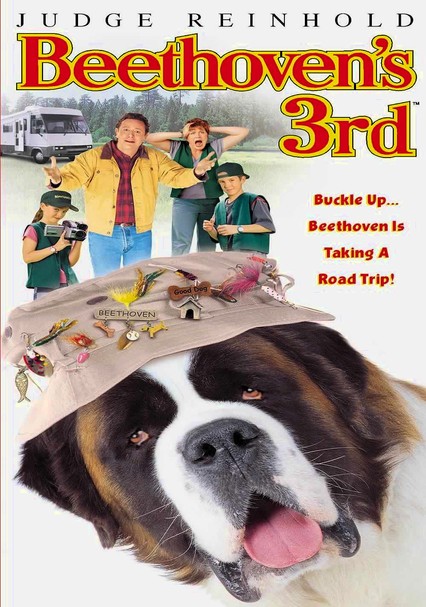 2000 G 1h 39m DVD
Everyone's favorite St. Bernard returns in this family film about man's best friend. Richard Newton (Judge Reinhold), his wife, Beth (Julia Sweeney), and kids Brennan (Joe Pichler) and Sara (Michaela Gallo) shove off in their camper for a road trip. Along the way, they gain a new passenger: slobbery Beethoven. The Newtons plan to return Beethoven to his owner -- but not before he turns hero when a pair of thieves enter the picture.

Parents need to know that this pointless third installment of the Beethoven franchise is packed with comedic pratfalls of varying degrees of intensity. Like the first movies, there are lots of scenes involving the titular St. Bernard shaking his slobber or water or food at inopportune times, covering the human characters and causing them to react outrageously. Even those whose love for dogs in movies makes them overlook weak storylines will find this one difficult to get through.

Lots of comedic pratfalls. A car crashes into a cement truck, causing liquid cement to spill all over a car. Bad guys throw bricks through windshields, slap, punch, and shove each other, and get dumped with raw sewage.

A boy flashes a middle finger at his sister. Beethoven passes gas in an RV, causing everyone to groan and moan and yell.

Not many strong messages come through, other than some basic ideas about caring for someone despite their flaws.

A Coca-Cola delivery truck is featured prominently in a scene where later Beethoven knocks over a tall stack of Coca-Cola bottles, causing them to break and spill all over the sidewalk.