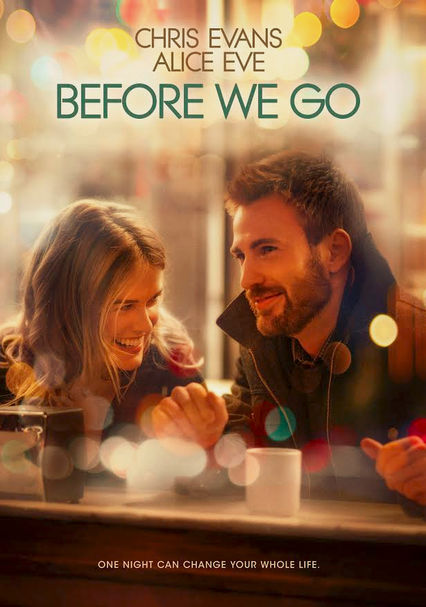 2015 PG-13 1h 35m Blu-ray / DVD
When Brooke Dalton is mugged and misses the last train back to Boston, she's by herself in the predatory darkness of New York City. After busker Nick Vaughan comes to her aid, the two forge a connection -- which brings complications in the morning.

Parents need to know that Before We Go -- actor Chris Evans' directorial debut -- is a relationship drama that takes place during one night in Manhattan. Evans and Alice Eve play strangers who are thrown together under unusual circumstances and end up getting to know and confiding in each other. There's some strong language ("s--t," "a--hole," and one "f--k"), one fight during which a man is punched in the face, social drinking by adults, and some sexual situations (a couple exits an elevator having obviously just had sex, and another couple kisses passionately but doesn't do anything more), though nothing particularly graphic.

One couple holds hands and kisses a couple of times while wearing bathrobes. A couple is shown exiting an elevator having clearly just had sex (the man zips up, and the woman pulls down her skirt).

Nick is shoved and punched in the face. Brooke walks by three guys who are drinking and throwing stuff on the street. The scene suggests she's in danger, but then Nick saves her.

Nick says something wise and sweet about relationships to Brooke: "There will always be struggles, you just have to find the person you want to struggle with." They remind each other that they have individual worth and shouldn't base that worth on another person or let it be influenced by the fear that they won't find anything -- or anyone -- better in the future.

People drink at various parties and bars that Nick and Brooke attend. They drink, too.