Before the Nickelodeon: The Early Cinema of Edwin S. Porter 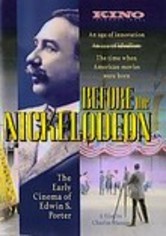 Before the Nickelodeon: The Early Cinema of Edwin S. Porter

1982 NR 1h 0m DVD
This hourlong documentary charts director Edwin S. Porter's career, chronicling how his inventive techniques influenced the art of filmmaking and changed the way movies were made, beginning with his revolutionary one-reeler The Great Train Robbery. Included are Porter films such as The May Irwin Kiss, Jack and the Beanstalk and The Life of an American Fireman. Blanche Sweet, a star from the silent movie era, provides the narration.