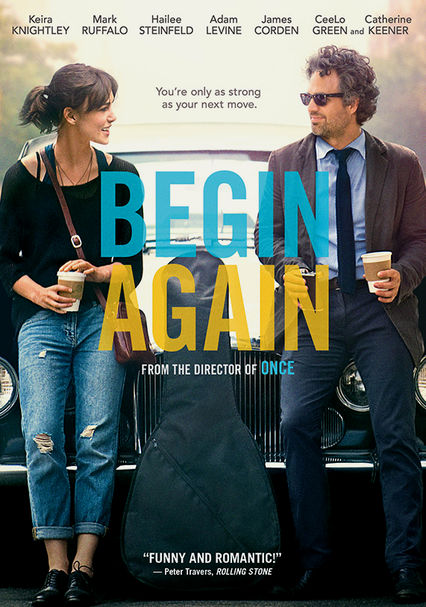 2014 R 1h 45m Blu-ray / DVD
Moving to New York City proves disastrous for a young singer after her boyfriend yields to the temptation of another woman. But opportunity comes knocking when she meets a recently axed music producer looking to launch her career -- and save his own.

Parents need to know that Begin Again is an affecting quasi-musical from the director/writer of Once about how music can be a salve to wounded personalities. The central character, Dan (Mark Ruffalo) is a music exec who's clearly battling an alcohol problem, and his transformation is the centerpiece of the movie (alongside the metamorphosis of a young woman who changes from being known as the girlfriend of her famous boyfriend into a musical talent in her own right). Dan is shown drinking, sometimes while driving, and appears rudderless after being fired. The movie's themes -- forgiveness, artistic integrity, infidelity -- may be somewhat heavy for tweens and younger, and there's lots of strong language (including "s--t" and "f--k"), but teens will love the music and spotting artists they've come to know, including Adam Levine and Cee-Lo.

Kissing between couples. There's talk of a man sleeping with a woman who's not his girlfriend, though nothing is seen. Longing stares. There's also some talk of a woman cheating on her husband, hurting her entire family. A teenager tells her dad she has no money left from her allowance because she spent it on condoms.

A man punches another; one character responds very loudly and vociferously to getting fired, causing a scene at the office. A woman slaps a man, and he throws his glass into a sink.

It's not over until it's over, and just because you're down doesn't mean you're out. Perseverance is the secret to making it through a challenging journey. Greta's story demonstrates the importance of following your own dreams, rather than riding sidecar for someone else's. Themes include forgiveness and artistic integrity.

Some characters drink Pepsi and Stella Artois, and many use Apple products, which are very present throughout the movie.

A man is constantly inebriated. He drinks in a car, from a flask, even while driving, and once asks his teenage daughter for money to pay for his beer. He's aware that he has a problem. He also smokes an e-cigar. Other characters are shown taking a quick drag on cigarettes. Social drinking among friends, usually shots or hard liquor.