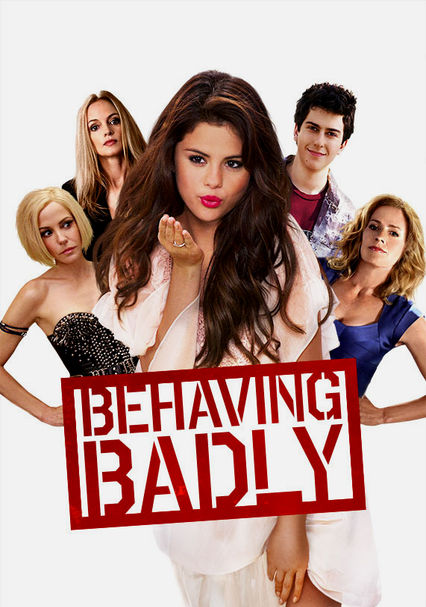 2014 R 1h 33m DVD
Nina is so lovely, and Rick so besotted with her, that the he has no qualms about wagering against a mobster's son over his chances of dating her. With two weeks to land his prey, the teen must face down a host of wild characters in this dark comedy.

Parents need to know that while Behaving Badly -- a raunchy comedy with lots of shock humor -- centers on a high-school-aged protagonist, it's not appropriate for teens. There's tons of sexual content, including topless strippers, casual sex, relations between an adult woman and a teen boy, and references to masturbation, oral sex, orgasm, prostitution, and adultery. Constant strong language includes "f--k," "s--t," "a--hole," "bitch," and much more, and there's casual and excessive substance use and abuse, including an alcoholic mother who attempts suicide and teens and adults who use Ecstasy. Despite starring teen-friendly actors like Selena Gomez and Nat Wolff, this is definitely an adults-only comedy (assuming any are actually interested).

There are dead bodies, a mother who attempts suicide, mafia goons who threaten and chase, a fist fight and more. A series of teachers die.

No perceivable positive messages except the reminder that unprotected sex can lead to sexually transmitted diseases.