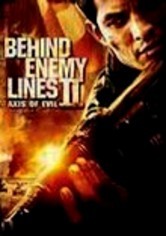 2006 R 1h 35m DVD
Led by Lt. Robert James (Nicholas Gonzalez), a team of Navy SEALs is sent to North Korea on a secret mission to knock out a missile site. But when the operation goes awry, four of the soldiers end up stranded on enemy turf. Now, to carry out their prime objective, the soldiers must battle past rogue forces. Keith David, Bruce McGill, Shane Edelman and Peter Coyote also star in this high-octane sequel helmed by James Dodson.