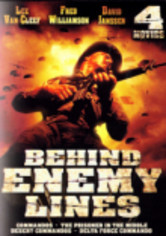 1967 NR 2 discs
A collection of four action films highlights the drama behind enemy lines. In Commandos, Allied soldiers work to secure an oasis in the African desert. In The Prisoner in the Middle, a weapons expert tries to keep a dangerous weapon out of enemy hands. In Desert Commandos, German soldiers stalk Allied leaders in the heat of the Sahara Desert. And in Delta Force Commando, a pilot seeks revenge on the terrorists who killed his wife.