Behind the Hatred: Mortal Enemies 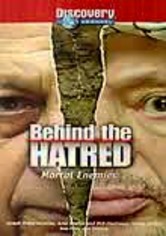 Behind the Hatred: Mortal Enemies

2004 NR 0h 50m DVD
The contentious relationship between Israeli Prime Minister Ariel Sharon and late PLO Chairman Yasser Arafat is one that was steeped in conflict and turmoil. Although on different sides, each one fought on behalf of his people, making them two of the world's most iconic political figures. Examine the lives and careers of these two men, from Israel's War of Independence in 1948 to the current deadly clashes existing in the Middle East.