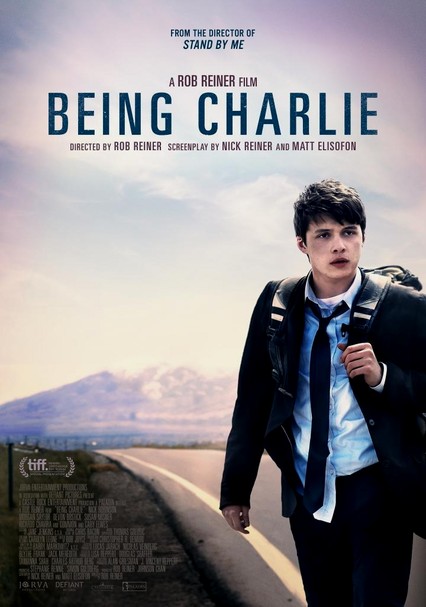 2016 R 1h 37m DVD
For Charlie, spending his 18th birthday in a Utah rehab clinic is not OK. So he busts out and heads back to California -- only to be greeted by his politico dad, who promptly enrolls him in another facility. Here, things begin to change.

Parents need to know that Being Charlie is a very mature drama about a privileged, drug-addicted teen who brings a defiant, self-sabotaging attitude to the many attempts made (however ineptly) to help him. His father offers tough love, his mother compassion, but nothing really gets Charlie's attention until a friend overdoses. Charlie is also mugged and beaten, and his bloody face is seen. Many different kinds of drugs are used or discussed. In a sexual situation, a nude woman is seen from behind, and there is a glimpse of her breast. There's also kissing and fondling, and plenty of crude discussion about different kinds of sex. Language is very strong, with frequent use of "f--k," "s--t," "p---y," "bitch," "c--t," and "d--k."

A college freshman dies of a cocaine overdose after having a seizure on the floor. Charlie is mugged and beaten; his bloody face is seen. A hitchhiking youth is tossed out of a car after he steals prescription narcotics. A youth snorting cocaine has major nosebleed. Joke about the sexual abuse of children by priests.

Forgiving yourself and others are important early moves down a long path toward decency and contentment. Repeated ill-advised actions eventually catch up with you. Addicts have a disease, and the nature of the disease makes it difficult to overcome.

While no specific products are underscored, a lifestyle of wealth, privilege and excess consumption is featured.

Substance addiction is a main theme of the movie. Alcohol, marijuana, cocaine, meth, and heroin are all either discussed or used. Men pass a joint. An addict cooks what appears to be heroin and is seen injecting it. Cocaine use is shown.