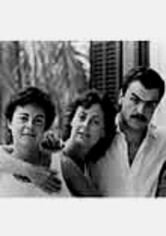 1987 NR 2h 3m DVD
Winner of several awards on the film festival circuit -- including Best Documentary and Best Cinematography at the Sundance Film Festival -- this gripping film details three months in the life of a Lebanese family inhabiting a heavily bombed Beirut neighborhood. Director Jennifer Fox creates a fascinating portrait of people living through the chaos of war as she explores the complexity of personal and political relationships under stress.