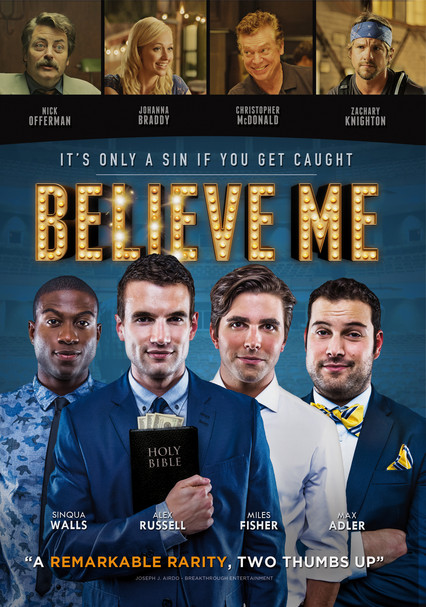 2014 PG-13 1h 33m Blu-ray / DVD
Four cash-strapped college students cook up a charity scam to pay their school expenses, but their wild success creates a moral dilemma for Sam Atwell, who's becoming reluctant to use his considerable charisma to defraud unsuspecting donors.

Parents need to know that Believe Me is a cynical look at religious hucksterism, but failings in the script and direction make it difficult to determine exactly what position the film takes. To raise money for themselves, four graduating college seniors create a fake Christian charity, preaching God's love and purporting to raise money for clean water in Africa while bilking faithful folks who mean well. They're caught skimming thousands off the top, but no one is punished, no one goes to jail, and they actually profit from the Christian T-shirt concern they ran as a side business. So while there's little objectionable content (infrequent language includes "a--hole," and there's some drinking, including once to excess and the possibility of underage drinking), since there's also no clear message or worthwhile takeaway, this isn't a great fit for younger viewers.

Language is infrequent but includes "a--hole."

The film is a cynical look at religious hucksterism, but it's actually difficult to tell what position it takes on the subject due to script/direction weaknesses. That said, there aren't any serious consequences for the characters' deceptions.

A college advisor drinks to excess and offers Sam alcohol. Students drink many beers. But other characters refuse to drink for religious reasons.