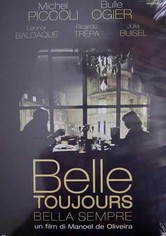 2006 NR 1h 10m DVD
Fate brings Henri (Michel Piccoli) and Séverine (Bulle Ogier) together again, nearly 40 years after he exited her life and left her to wonder whether he had revealed her most intimate secret. Upon reuniting, he discovers that the years have matured her in unexpected ways. Ricardo Trêpa, Leonor Baldaque and Júlia Buisel co-star in Manoel de Oliveira's follow-up to Luis Buñuel's 1967 classic Belle du Jour.