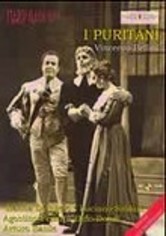 1966 NR 2h 20m DVD
Gianna D'Angelo and Luciano Saldari sing the leading roles in this production of Vincenzo Bellini's 19th-century opera of love and madness set against the backdrop of the English civil war. Arturo Basile conducts, and Agostino Ferrin and Dino Dondi sing supporting roles in this 1966 performance filmed live at the Teatro Verdi in Trieste, Italy. Special bonus tracks include a selection of arias sung by Danilo Formaggia.