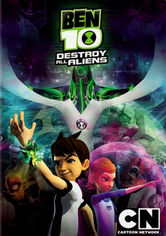 Parents need to know that violence is a concern in this TV movie inspired by the animated series Ben 10. Cartoon-style exchanges between Ben (in various alien forms) and his alien competitors result in imploding buildings, mangled cars, and exploding missiles, but no visible injuries. Expect some competitive banter between Ben and his cousin as each tries to outdo the other and they tease each other with names like "dweeb" and "pea brain." For his part, Ben isn't a rule-follower when it comes to teachers' or parents' policies, but he changes his tune as a result of his experiences.

There's no blood and gore, but cartoon-style violence is prevalent in Ben's clashes with aliens. Laser blasts, explosions, missiles, gun use (by humans and aliens), hand-to-hand exchanges, etc. are common. Remarkably, everyone escapes unscathed.

Ben begins the movie defiant of his parents' rules and eager to set his own course, but events open his eyes to the importance of being part of a family.

Ben 10 is a popular character among grade-school boys, and the character has been revamped for several TV shows and movies. There's also an extensive product line that bears the character's name, including video games, action figures, toys, and clothing.