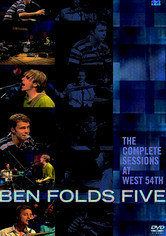 2001 NR 1h 55m DVD
Musicians found a welcoming outlet for their talent in "Sessions at West 54th," and Ben Folds Five's performance there lent the show much-deserved buzz. Catch the band's concert -- never before seen in its entirety -- from start to finish. Songs include "Missing the War," "The Battle of Who Could Care Less," "Selfless," "Cold and Composed," "Smoke," "One Angry Dwarf and 200 Solemn Faces," "She Don't Use Jelly" and "Song for the Dumped."