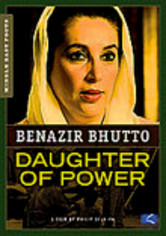 2008 NR 1h 5m DVD
Benazir Bhutto sheds insight into her remarkable career as the world's first female Muslim leader in this documentary, which features interviews with the former Pakistani prime minister who was ousted two times from office. Elected in 1988 and 1993, Bhutto was twice dismissed from her post amid allegations of corruption. After eight years in exile, she returned home in 2007 to seek reelection and was assassinated Dec. 27.