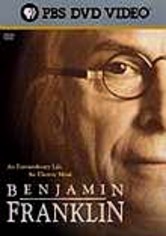 2002 NR 3h 30m DVD
This compelling PBS miniseries follows Benjamin Franklin's impressive career -- from scientist and revolutionary to founding father and American diplomat -- drawing on Franklin's own writings and those of his contemporaries. The narrative is set against the breathtaking events in which Franklin played a central role: the age of scientific discovery, the Declaration of Independence, the American Revolutionary War and the Constitutional Convention.