Bernstein in Australia: Tchaikovsky Symphony No.6 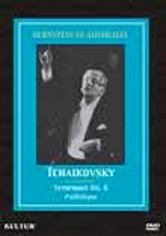 Bernstein in Australia: Tchaikovsky Symphony No.6

1974 NR 0h 52m DVD
Leonard Bernstein -- the longtime musical director of the New York Philharmonic Orchestra who is perhaps best known for composing the Tony Award-winning score to "West Side Story" -- conducts the orchestra in its debut at the Sydney Opera House in 1974, playing Pyotr Tchaikovsky's "Symphony No. 6." Also known as "The Pathetique," the somber piece is rumored to represent the composer's farewell to life shortly before he committed suicide.