Bernstein in Paris: The Ravel Concerts 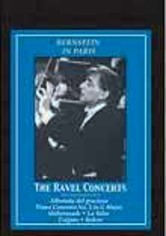 Bernstein in Paris: The Ravel Concerts

1975 NR 1h 27m DVD
Leonard Bernstein -- the longtime director of the New York Philharmonic and one of the most influential musical figures in the latter half of the 20th century -- conducts the National Orchestra of France in a tribute to the works of Maurice Ravel, filmed inside Paris's glorious Theatre des Champs Élysées. Selections include "Alborada del Gracioso," "Piano Concerto No. 1 in G Major," "Shéhérazade," "La Valse," "Tzigane" and "Bolero."