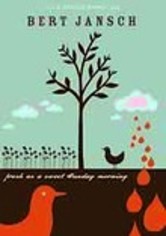 2006 NR 1h 41m DVD
Recorded live at the Memorial Hall in Sheffield, England, in April 2006, this eclectic concert showcases the prodigious talents of British folk maestro Bert Jansch, who takes the stage to perform 23 choice tracks. Also sitting in for several numbers is Jansch's frequent collaborator and bandmate John Renbourn. Songs include "Hey Pretty Girl," "Strolling Down the Highway," "Lily of the West," "Backwaterslide" and 19 others.