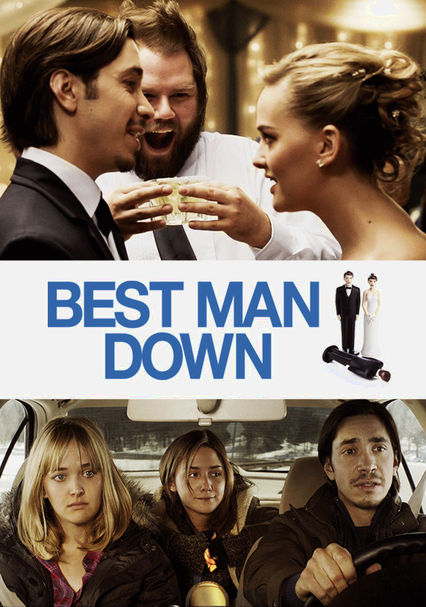 Parents need to know that Best Man Down is a dark comedy targeted at adults. There's occasional swearing (including "s--t"), a few scenes with drinking, including one person who gets incredibly drunk at a wedding, and a scene where a teenager sees her mom and her mom's boyfriend smoking crystal meth. There's one very brief scene that shows a man's naked backside as he gets out of bed after presumably having sex, plus a joke about a "boob job."

A man is shown pulling on his underwear as he gets out of bed, presumably after having sex with another man. There's a brief glimpse of his backside. Other men are seen in brief scenes in their underwear or wrapped in a towel after a shower. A woman talks about whether she's had a "boob job."

A man is seriously injured in a drunken accident; his head is shown with a big, bloody gash. Another man menaces a teenage girl and later brandishes a gun and threatens people.

People aren't always what they seem, and a few may be hiding truly wonderful secrets. Also, friends are important and doing the right thing instead of the easy thing can be rewarding.

People drink heavily at a wedding, including shots and hard liquor. One man gets extremely drunk, to the point where he is staggering and obnoxious. Men smoke cigars to celebrate an important moment. A teenage girl lives with her mom and her mom's boyfriend, who both use meth. The boyfriend also seems to be involved in a few shady deals, and forces the girl to shoplift cold medicine that can be used to manufacture meth. Casual jokes about needing a Xanex.