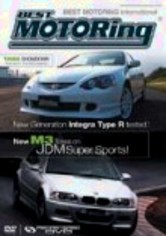 2003 NR 1h 23m DVD
In this edition of the Best Motoring International series, Japan's best street racers get behind the wheel and burn rubber with some of the most wicked rides on the planet. Competing for top honors are the BMW E46 M3, the Toyota Aristo V300, Honda's new generation Integra Type R (DC5 and DC2), the Impreza WRX STi, Mazda's RX-7 Type RS and the Accord Euro-R. Also included is footage of the Touge Showdown "Battle in the Mountains."