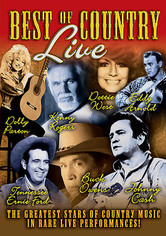 2006 NR 1h 0m DVD
Featuring live performances from some of country music's most legendary stars, this compilation celebrates the history and prominence of one of the world's most popular musical genres. With rarely seen live performances as well as exclusive interviews, this collection boasts appearances by artists such as Tennessee Ernie Ford, Eddy Arnold, Chet Atkins, Johnny Cash, Buck Owens, Kenny Rogers, The Oak Ridge Boys, Dolly Parton and more.