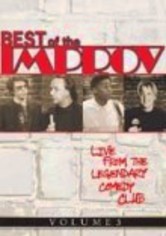 2003 NR 0h 51m DVD
Filmed live at Los Angeles's legendary Improv Club, this collection features some of the best classic comedy routines from today's biggest stars. Long known as one of the top places to catch comedians poised for stardom, the club has hosted more hilarity than one volume can hold. This fifth volume in the series includes sets by Ellen DeGeneres, D.L. Hughley, Richard Belzer, Will Durst, Larry Miller and many others.