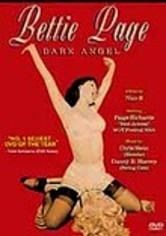 2004 NR 1h 15m DVD
Paige Richards plays Bettie Page, the dark-haired, voluptuous vixen of the 1950s, in this clever biopic directed and produced by Nico B. The last three years of the Dark Angel's career are chronicled, from her claim to fame as a &NFiPlayboy&NFi_; centerfold and bondage queen to her work with fetish photographer Irving Klaw, which led to a congressional inquiry and her mysterious disappearance.