Beulah: A Good Band Is Easy to Kill 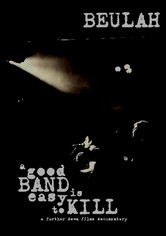 Beulah: A Good Band Is Easy to Kill

2005 NR 1h 29m DVD
Featuring the full-length documentary A Good Band Is Easy to Kill as well as 17 bonus songs filmed live on tour, this Beulah video captures the San Francisco rockers in some of their final performances before disbanding in 2004. A comprehensive set list includes "Landslide Baby," "Me and Jesus Don't Talk Anymore," "Disco: The Secretaries Blues," "Popular Mechanics for Lovers," "I Love John, She Loves Paul" and "Gravity's Bringing Us Down."