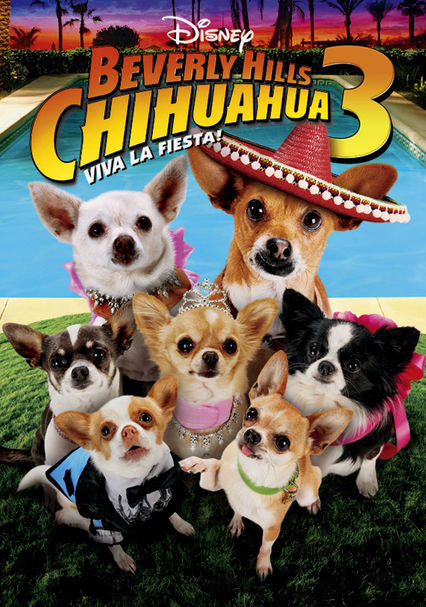 2012 G 1h 29m DVD
Join Papi and his two- and four-legged family as they move into a posh Beverly Hills hotel, complete with a luxurious doggy spa. But there's trouble in paradise when Rosa, the littlest member of the pack, feels smaller and less special than ever.

Parents need to know that Beverly Hill Chihuahua 3: Viva La Fiesta! is the third installment in the popular talking-dog franchise. Featuring less menacing situations than the previous two films, the "threequel" is a celebration of the Latin American tradition of the quinceañera -- albeit with a dog as the celebrant, not a human. There's nothing questionable in the movie beyond a few jokes about "pee mail" between dogs. Although there aren't many product placements, there are several pop culture references (mostly to rock bands), and there's a tiny bit of romance between a pit bull and a posh show dog. Older preschoolers ready for live-action films and grade schoolers will enjoy this doggie comedy that teaches about Mexican culture and the importance of family.

A married human couple is shown waking up in bed next to each other; later they hug and dance. A married dog couple tries to have a puppy-less date together. A pitbull falls for a purebred "VIP" show dog and woos her by serenading her and complimenting her.

Comical pratfalls (by humans and dogs).

The chihuahuas are insulted by being called "mutts." Other insults include "they stink" and "terrible." The dogs discuss communicating via "pee mail."

Several positive messages, mostly revolving around family. Papi is a dedicated father to his five puppies, and he repeatedly explains that it's a father's responsibility to keep his offspring safe and educate them about the world around them. Everything Papi does is for the good of his family. By preparing for her quince, Rosa discovers that she must overcome her fears.

An Hermes handkerchief is pointed out a couple of times. Comedic references to real musical acts, only with dog-themed names: Bob Marley and Me (complete with dogs wearing dreads), Houndgarden, Motley Chew, Lady Gaga and the Tramp, Black Labbath, Black-Eyed Fleas, etc.

There's a toast at a party where it looks like champagne is being distributed to adult guests.