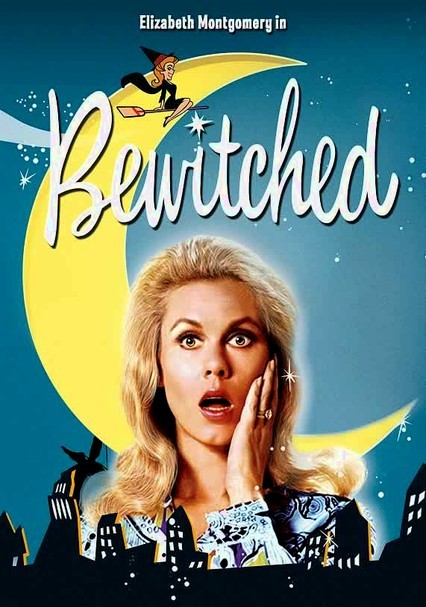 1964 TV-G 5 seasons
By all accounts, Samantha Stephens (Elizabeth Montgomery) seems like your everyday American housewife -- but she's a witch. Her husband, Darrin (Dick York), is along for the fun-filled ride as a mortal in this classic television series. Sam agreed to give up her "craft" when they married -- much to her mother's (Agnes Moorehead) horror -- but Sam finds herself using her magical methods in all kinds of situations, which leads to hilarity.

In the second season of this spellbinding 1960s sitcom, newlyweds Darrin and Samantha make magic the old-fashioned way and welcome a new baby, Tabitha, into their suburban family -- much to the delight of meddling Grandma Endora.

Samantha Stephens has promised her flustered husband, Darrin, that she'll stop practicing witchcraft. But the otherwise normal couple learns that their toddler daughter has supernatural powers of her own in the third season of this magical TV series.

Samantha continues to cause magical headaches for husband Darrin in Season 5. This year, Samantha's meddling mother shrinks Darrin, Tabitha turns a classmate into a butterfly and Samantha's sister Serena interferes with the Stephens' marriage.

In this supernatural sitcom's sixth year, Dick Sargent steps into the role created by Dick York: lovable Darrin Stephens. Season highlights include Tabitha venturing into the pages of a storybook and the birth of Samantha and Darrin's second child.

Samantha's magical powers -- and Darrin's ire over her propensity to use them -- extend to a new continent when the Stephens family travels to Europe for a vacation in the final season of this long-running television sitcom.

Parents need to know that classic sitcom Bewitched -- which revolves around a witch trying to live a regular mortal life in American suburbia -- reflects the values of the time, including some now-dated ideas about men and women's roles in society. Witchcraft is often used to both create conflict and resolve problems, and there's occasional cigar smoking and drinking (by adults). The tensions surrounding societal changes in America over the course of the show's run are subtly addressed -- but all of that will probably go over kids' head as they giggle at the nose twitches and silly scenarios.

Samantha and Darrin were one of the first TV couples to sleep together in the same bed. Samantha is pregnant during some seasons. Occasionally the two are shown hugging or lightly kissing each other.

Some of the gags are physical (falls, etc.), but they're not violent.

Though the series is positive and upbeat and emphasizes the importance of family, it also reflects the values of its time, including now-dated gender roles. That said, there's lso some subtle reflection of the changing social attitudes that took place during the 1960s and early '70s.