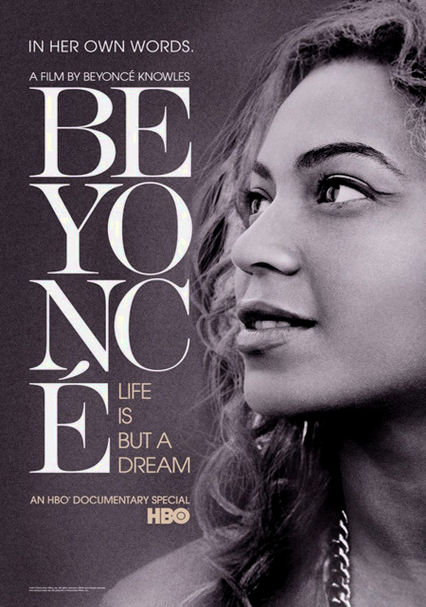 2013 NR 2 discs
As director, producer and star, Beyoncé is in charge of the portrait she presents in this film about life at the top of the pop universe. Using on- and off-stage footage -- some shot from her own laptop -- Beyoncé provides a window into her world.

Parents need to know that Beyonce: Life Is But a Dream is a self-produced documentary about singer Beyonce Knowles whose main areas of concern are edgy language (including "f--k" and "s--t") and mature themes, like pregnancy and relationships. Occasionally cigarette smoking and wine drinking is visible. A silhouette of Knowles' naked, pregnant boy is visible without any private parts in detail; concert footage features some sexy dancing and skin-revealing outfits, too.

Contains references to making love. Concert footage features skin-revealing costumes and provocative dancing. Beyonce's pregnancy is a theme; sonogram footage is visible, as is a silhouette of Beyonce's naked, pregnant body (but no private parts are really shown).

Nothing violent, but Beyonce admits to wanting to be angered before a performance in order to do well on stage. A miscarriage is discussed. Occasionally members of her entourage get a little testy and yell.

Words like "piss," "ass" and "bitch" are audible both in conversation and song lyrics. Curses like "s--t" and "f--k" are frequently used. Occasionally a rude gesture is visible.

Beyonce gets across messages about hard work and determination, as well as introspection and thoughtfulness. She expresses the value of her belief in God. She also discusses issues specifically faced by female singers and performers in the industry, including establishing boundaries and performing while pregnant.

Beyonce's music and concerts are central to the show and this is clearly a promotional vehicle for her brand. Apple computers are prominently visible; in one scene people are eating from a box of Cheez-Its.

Cigarette smoking is visible; wine is occasionally shown, but not really consumed on camera.