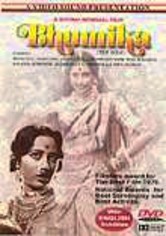 1976 NR 2h 19m DVD
Keshav takes Usha to Bombay on a quest to realize her dream of being in the movies. But it's not long before Usha becomes the darling of Bollywood -- and the target of exploitation from every man she meets, including Keshav. Keshav and Usha marry and have a daughter, but Keshav's jealousy causes his new wife to leave her young family. Years later, Usha decides to reconnect with her past life and the daughter she never knew.