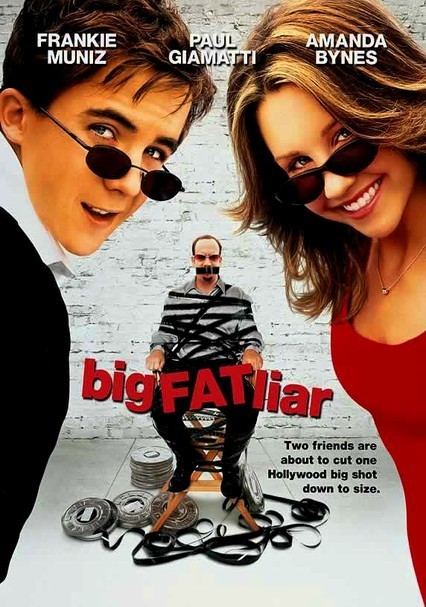 Parents need to know that Big Fat Liar is a funny take on ruthlessness in Hollywood full of puerile pratfall humor and name-calling. There are instances of bullying throughout the film -- especially at the beginning -- and the character stereotypes (dumb jock, senile grandmother) are plentiful. While the madcap antics of Frankie Muniz, Amanda Bynes and Paul Giamatti will appeal to kids and grown-ups, lessons on the importance of being honest are found amid all the silliness.

A character is knocked off his skateboard by a group of bullies, who also push and shove him before stealing the skateboard. While not shown, a character is kicked in the groin, replete with sound effects to drive the point home. A character dressed as a clown is shown being knocked over by a group of young kids at a birthday party; all of whom take turns jumping, tackling, and leaping on top of the clown.

Name-calling: "Up yours," "retardo," "You suck." A character shouts from off-camera that a "dookie" has clogged the toilet.

Promotes, eventually, the importance of telling the truth over lying, and shows how lying on a regular basis violates the trust between kids and parents, besides raising doubts even when "big fat liars" tell the truth.

Coca-Cola cans and a vending machine are prominently featured.

Adult social drinking, and an adult character lights a cigar, but instead of smoking it, uses it to burn some papers.