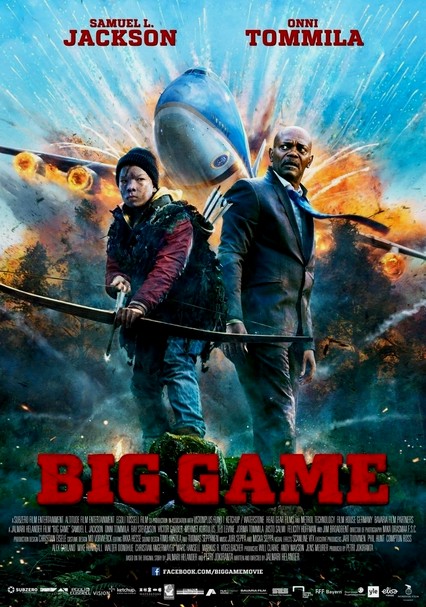 2015 PG-13 1h 27m Blu-ray / DVD
In the rugged countryside of Finland, a young thirteen-year-old embarks on a traditional quest to prove himself by spending twenty-four hours alone in the wild, armed with only a bow and arrow. After witnessing a spectacular crash, he discovers the escape pod from Air Force One, containing the President of the United States. When they realize a group of kidnappers is hot on their trail with the intention of taking the president, this unlikely duo must escape their hunters as they search for the American Special Forces team sent out to find them.

Parents need to know that Big Game is a violent action-adventure movie in the spirit of Air Force One or Die Hard, but with a 13-year-old as the hero. Directed by a Finnish filmmaker, the movie is set in Finland's remote wilderness, where a boy finds the president of the United States (Samuel L. Jackson) trapped in an escape pod. Expect frequent violence, use of advanced weapons, and a high body count, mostly from gunshot wounds and explosions. The language is infrequently strong but does include "s--t" and one use of "motherf---ker." Families who watch it with middle school-aged kids and up can discuss rites of passage, courage under fire, and how young people can save the day.

Strong violence and a high body count. People die in airplane explosions, are thrown off of planes and helicopters, get shot in the heart with an arrow, and are killed at gunpoint or with a rocket-propelled grenade-type of weapon. Men beat up the president and a 13-year-old boy who's helping him. The boy has a dead deer's head strapped to his backpack throughout part of the movie.

Biggest message is about courage under fire -- don't give up just because the odds are against you, and find the strength to face your enemies and help others, even if it means endangering yourself.