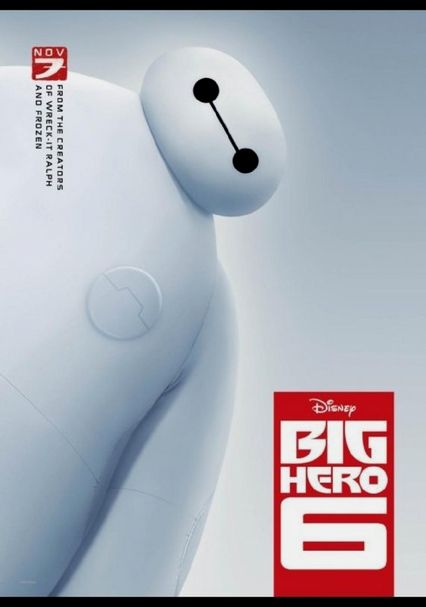 2014 PG 1h 42m Blu-ray / DVD
In this animated adventure, genius robotics engineer Hiro Hamada finds himself enmeshed in a nefarious scheme to wipe out the city of San Fransokyo. Accompanied by his robot best friend, Hero joins a ragtag team intent on saving the City by the Bay.

Parents need to know that Big Hero 6 is an action-packed animated adaptation of the same-titled superhero comic that's likely to attract younger kids as well as tweens/teens who are already fans of the Marvel universe. The movie is an unconventional origin story that focuses on the power of brotherhood, friendship, and using your gifts to help others. One of the film's main themes is about coping with grief, as the main character's beloved older brother (his only immediate family) tragically dies early in the film; Hiro's sadness may be hard for sensitive kids. Another near death is very upsetting, and there are sometimes-intense confrontations between the movie's scary supervillain and the protagonists that injure but don't kill people. On the other hand, the central robot, Baymax, was designed to heal not hurt, and his moral code influences other characters in positive ways. With its refreshingly diverse cast and uplifting message, Big Hero 6 is a captivating adventure story for the entire family.

A terrible fire kills Tadashi (the main character's beloved older brother) and his professor. Hiro and Tadashi are orphans, so that leaves Hiro with no immediate family except for his guardian, Aunt Cass. Action scenes can be intense and include robot death matches between remote-controlled robots. The masked supervillain (who can be very scary) sends microbots after Hiro and his friends. Hiro reprograms Baymax to "destroy," leading the robot to injure their friends and nearly kill the villain. The villain squares off against the Big Hero Six, all of whom have different super weapons -- but none is a gun. In one scene, it looks like another character is going to sacrifice himself; it's really upsetting to watch.

Very sweet messages about honoring the memory of the departed, recognizing the importance of healing, encouraging the furthering of a legacy, seeking justice versus revenge, and surrounding yourself with friends and family when you're going through a tough time. Hiro's grief journey will show kids that getting through tragedy is sad but possible with a little help from those who love you. The movie also stresses education, particularly in science and technology. A bit of "fat" humor centered on Baymax's size and round belly, but it doesn't feel mean spirited.

No overt alcohol or drug use (although adults do consume drinks at a reception), but Baymax acts "drunk" when his battery life is depleted.