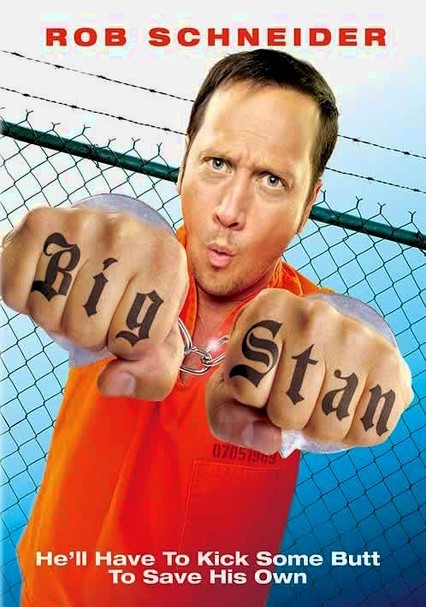 2007 R 1h 49m Blu-ray / DVD
Rob Schneider stars as a diminutive real estate con man who, upon learning he's headed for prison, hires a martial arts guru to train him for the purpose of self-defense behind bars. Once incarcerated, Stan earns the respect of his fellow inmates.

Parents need to know that it does not get more offensive than this -- and for a comedy, it's not terribly funny. Stan's fear of being raped in prison drives the plot in this movie. Even hardened adults will squirm at some of the subject matter. Get out of jail free-- bypass this crude movie.

Stan is terrified of being raped in prison and talks extensively about being penetrated anally. He trains with a martial arts master to become immune to rape and proceeds to beat up dozens of guys in prison. Broken fingers, teeth being knocked out, men sticking razors up others anuses...pretty intense stuff for a "comedy."

Stan is a sleazy real estate kingpin who is sent to prison and fears being raped in prison. Every excuse for crude humor and lewd language has been exercised liberally here. Women are used for sex, men are violent and vile, and a small child is encouraged to smoke cigarettes.

Stan drives a Lamborghini, and talks about his Bang and Olufsen stereo. He has everything that money can buy, including a wife whose boob job he paid for.

Cigarettes are The Master's main form of nourishment. He is never seen without a cigarette, and even encourages a small child to smoke. Stan gets drunk and he drives with the glass of Scotch teetering on his dashboard. Adults drink whiskey, hard alcohol, and beer and talk about pot and crystal meth.