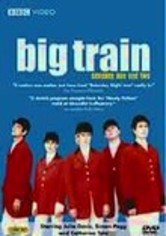 1998 NR 2 discs
From the mundane lives of cartoon villains and a Wild West shoot-out with the Bee Gees and Chaka Khan to a duck assassination and the ever-popular animated staring contest, this show is the biggest thing to happen to sketch comedy since Monty Python. British comedy takes a turn for the hilariously absurd with the likes of such future luminaries as cast member Simon Pegg (Shaun of the Dead).